Gamma Knife is a stereotactic radiosurgery device that provides particularly precise and efficient treatment of specific areas in the brain.

This non-invasive treatment method is based on extremely precisely directing ionizing radiation beams towards the area of the brain that is being treated.

With the help of this device, neurosurgeons can treat benign and malignant brain tumors, vascular malformations, trigeminal neuralgia and other diseases, without making a single incision.

The treatment procedure is painless. Usually, patients can go home and back to their normal routines the next day after the operation. Furthermore, Gamma Knife treatment significantly reduces the chance of complications that might be encountered during an open surgery.

In the Stereotactic Radiosurgery Sector at the Neurosurgery Clinic of the Hospital of Lithuanian University of Health Sciences (LSMU) Kauno klinikos, we have installed the most advanced radiosurgery instrument that currently exists in the world – Leksell Gamma Knife Icon.

Features of this new-generation device such as the monitoring of head movements, an option to perform computer tomography during the procedure and upgraded software help to ensure unparalleled precision and expand the limitations of treatment, and, at the same time, create the potential to apply this method to a wider spectrum of patients, including infants, children and patients with severe, concomitant diseases. 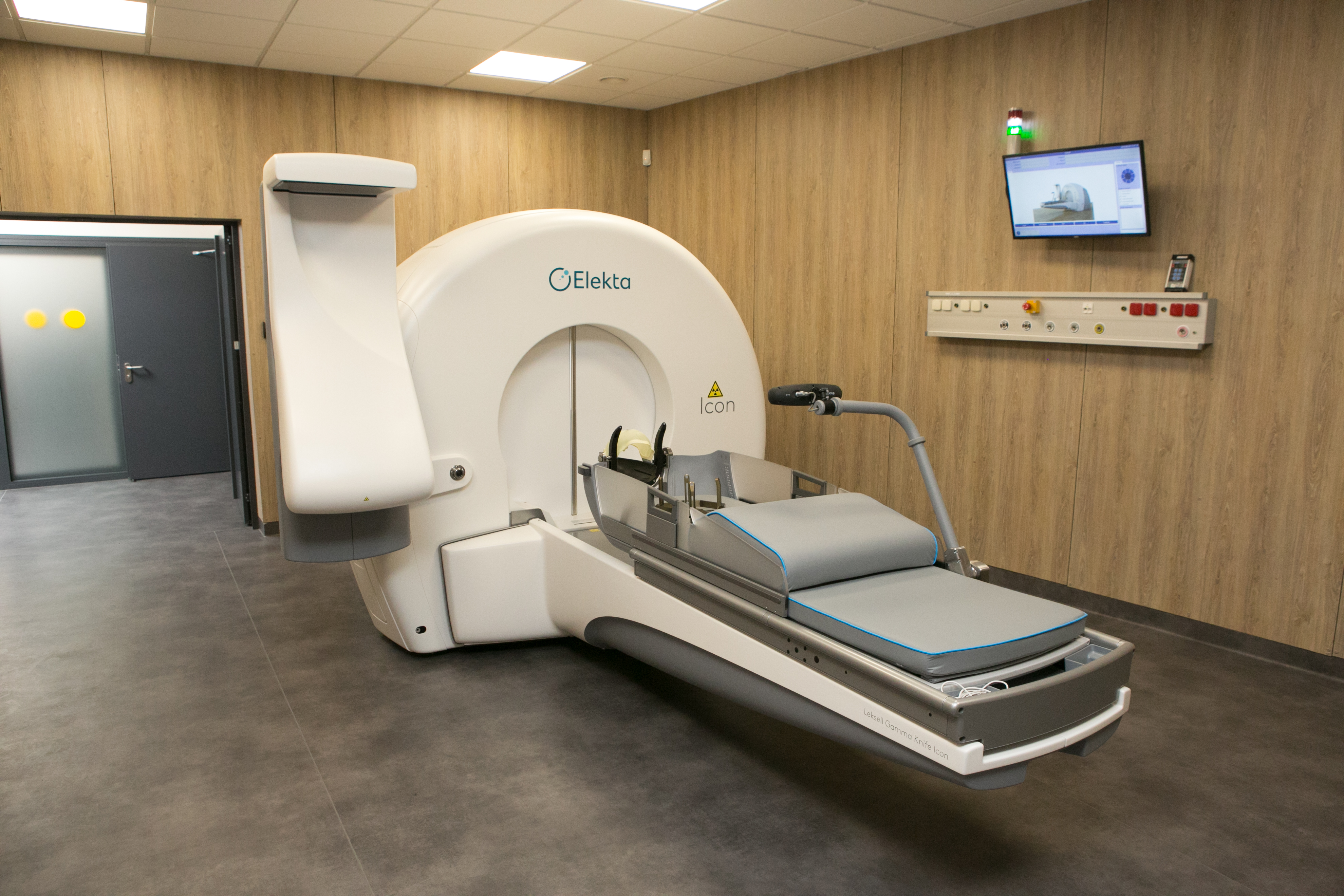 This device enables the treatment of tumors embedded in the depths of the human brain, as well as other diseases without making incisions or opening the skull. Gamma Knife produces enough energy to destroy harmful structures in the brain and reduce or stop tumors or vascular malformations from growing, but at the same time does not damage the healthy part of the brain with a significant dose of radiation.

In order to reach the target, the device uses gamma rays from 192 (cobalt 60) sources, which all intersect at a specific point with the precision of 1 tenth of a millimeter (approximately the thickness of a sheet of paper). Due to this precision, important structures nearby (i.e., nerves, blood vessels or the brain stem) remain intact.

Compared to other radiotherapy devices, Gamma Knife is more precise and transmits a 2-4 times smaller radiation dose to the healthy part of the brain. For this reason, the chances of patients retaining their eyesight, hearing and cognitive abilities is increased. The radiation dose experienced by the patient’s body can be up to 130 times smaller than that produced by other radiotherapy devices.

Due to progressive solutions, this Gamma Knife model can sense the movements of the patient’s head with immaculate precision (which amounts to tenths of a millimeter). The treatment, during which a special mask instead of a frame can be used, may be performed in several sessions. During the procedure, a computer tomography scan can be done as well. This, in its turn, ensures even a higher level of precision.
Stereotactic radiosurgery procedures are planned by using high-resolution magnetic resonance images and the newest software, which allows for specific shapes or volumes of rays to be formed.

GAMMA KNIFE IS USED FOR TREATING THE FOLLOWING DISEASES:

This is an extremely safe treatment method that has been used all over the world since 1968. Each year, Gamma Knife-assisted treatment is prescribed to more than 70,000 patients. Since this technology was created, it has been used to cure over 1 million patients.

Gamma Knife enables surgeons to provide unique treatments to all patients that are in dire need. The safety and precision of this radiosurgery device is unmatched in Lithuania and the Baltic region as a whole.